These programs are distributed in the hope that they will be useful, but WITHOUT ANY WARRANTY; without even the implied warranty of MERCHANTABILITY or FITNESS FOR A PARTICULAR PURPOSE.

Most are made available under the terms of the GNU General Public License as published by the Free Software Foundation, either version 2 of the License, or (at your option) any later version, but see the License conditions for each individual program.

Almost all of these programs are in the form of Yahoo! Widgets which require installation of the Yahoo! (Konfabulator) Widget Engine. Yahoo! Widgets are coded in XML and javascript.

They are packaged as zipped Widgets (with extension .widget) inside a zipped folder. The code can be examined by unzipping the .widget files. 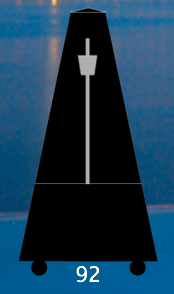 Beat Meter can be used to measure the beat (MM) rate of a piece of music. It can also be used as a simple metronome and tuning device. 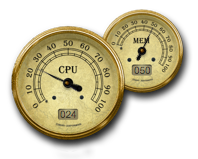 CPU and Memory Gauges shows the percentages of cpu and memory resources that are in use.

Default Printer is a utility to rapidly switch between installed printers. It also gives quick access to the printer queues.

It can open files in their default applications and, on Macintosh only, can send text, PostScript(PS) and PDF files directly to the default printer. 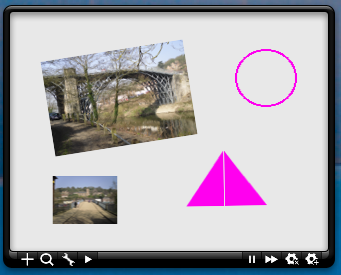 DrawDemo is a simple drawing Widget, somewhat like a whiteboard or blackboard. With it, you can draw rectangles/squares/triangles, ellipses/circles and lines. The images can be colorized, rotated, dragged, zoomed and deleted. The canvas can be exported and re-imported. You can also drag and drop image files onto the canvas and most drawn objects, and manipulate them with the drawing tools.

DrawDemo also has many of the features of WebImages and of ImageView. With it you can download images onto most of the objects on the canvas or use an object to display a slide show. This makes it a Do-It-Yourself multi-cam Widget.

Please note that this is not a graphics editor - the Widget manipulates whole objects, not pixels or bit-patterns. There is no way, other than by screen capture, of obtaining a graphics image (such as a png, jpg or gif) of a whole canvas. 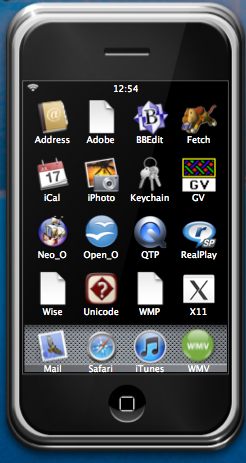 The DropMover Widget displays a keypad, which can be used to move or copy files and folders to specified folders, or to open applications, data files and web pages.

DropMover has seven keypad layouts of increasing complexity. Each has its own settings which are preserved when the Widget is closed and restarted.

The Widget moves files and folders by copying them to their new location, then deleting the originals. Please use the Confirm Action feature where loss of files would be important.

The EAN13 Barcode Widget displays the barcode for an EAN13 number entered by the user. 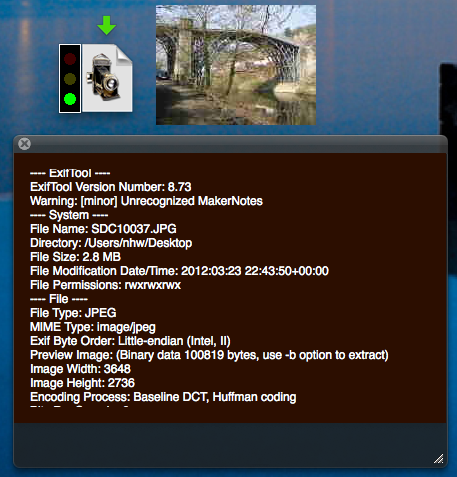 EXIFtool displays the EXIF data of an image dropped onto the window. It can also display a thumbnail image. 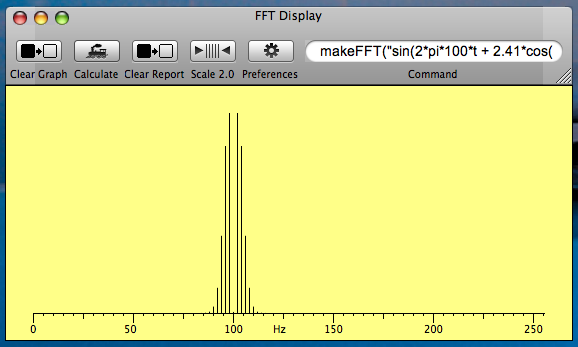 FFT Display computes a Fast Fourier Transform of a function (in the time domain) specified by the user and displays the spectrum. A number of common functions can be selected from a menu.

File Counter displays the number of files in a user specified folder.

IBAN Checker is a simple Widget which checks the format and checksum of an International Bank (IBAN) Number.

You may also use my web version here. 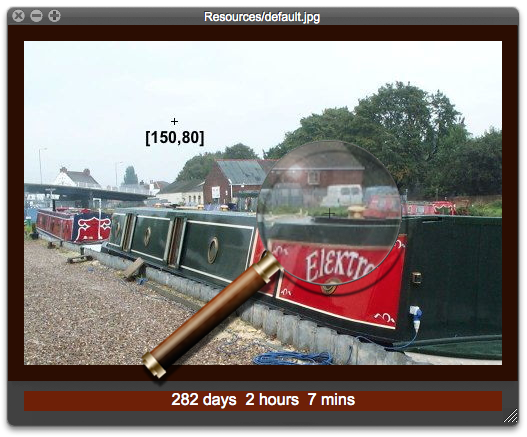 Image Display is a simple Widget which can display images.
It is also able to display comma or tab separated value (CSV or TSV) files and can compute means and standard deviations of the column data.

This new version has a magnifying glass which can show a magnified image of any part of the displayed image (Windows only).

It now also has support for World Files. 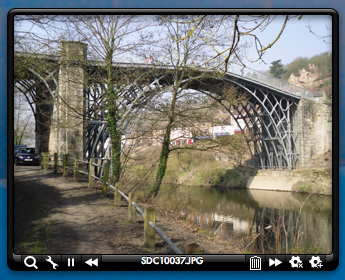 ImageView is a simple image viewer. An image dragged onto the Widget's window is displayed.

ImageView can spawn copies of itself, so that several images can be viewed at the same time. When ImageView is restarted, it can restart the spawned Widgets, so that they can display their respective images.

Each copy (spawn) of ImageView can also provide a slide-show using images from nominated folders.

The KonAVio Media Widget is a generic cross-platform media player which can play audio and video files and streams using QuickTime Player, RealPlayer and Windows Media Player. It can also play Flash movies.

On the Macintosh, it requires the Flip4Mac WMV Player which enables QuickTime Player to play Windows Media.

[Note: On the Macintosh, KonAVio Media can play local and remote .swf and .flv Flash files. On Windows, only remote .swf files can be played.]

The Konsposé Hotspot Widget displays a keypad, which can be used to activate hotkeys, such as the Konsposé (Heads Up Display) hotkey.

The Widget does not set any hotkeys of its own. Its function is to simulate the pressing of hotkeys to activate applications and Widgets which have themselves set hotkeys.

Konsposé Hotspot has six keypad layouts of increasing complexity. Each has its own settings which are preserved when the Widget is closed and restarted.

Buttons can be clicked and they can also be set to be hotspots which activate when the mouse pointer enters them.

It is also possible to associate AppleScripts (on the Macintosh) or VBScripts (on Windows) with the keys, as an alternative to providing hotkey action.

Alt-click (Windows) or Option-click (Mac OS X) a key to choose which hotkey the key is to simulate.

LED_Banner gives you a scrolling LED Banner on your desktop. You can have your own messages, customize the LED and border colors, and resize the length and height of the banner. You can enter a text in the preferences or specify a text file or any number of RSS URLs to be used as the source of the banner text. 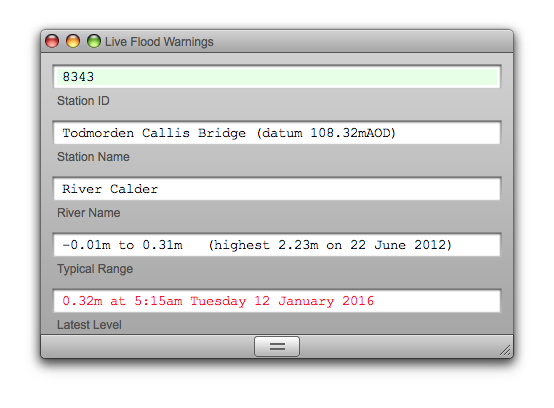 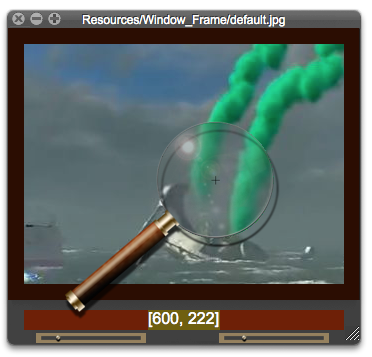 Magnifier II is a simple Widget which can display images.

It has a magnifying glass which can show a magnified image of any part of the displayed image (Windows only).

It has support for World Files. 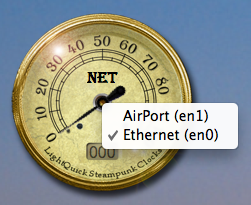 Network Gauge shows the percentage of network resources that are in use.

Obscure Mailtos converts mailto links in HTML pages into JavaScript scripts which are less likely to be harvested by mail-bots. 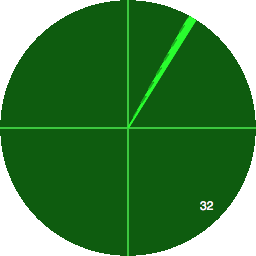 Demonstrates how to achieve continuous rotation of images in Yahoo! Widgets. 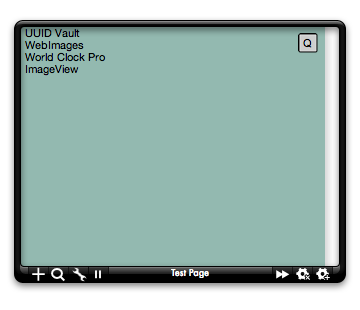 Scraper can fetch pages from the World Wide Web and can, in many cases, extract and display text taken from the pages. 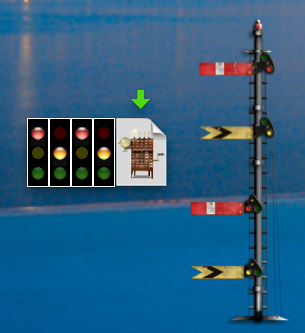 Version 1.3.1 This new version can be controlled by other Widgets using tellWidget calls. 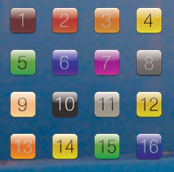 The SoundKeys Widget displays a keypad, which can be used to play sounds.

Each button of a keypad can have a sound associated with it and the Widget can also associate a hotkey with each button, so that its sound can be played by using the associated hotkey.

SoundKeys has eight keypad layouts which share a common set of sound and hotkey settings. Note that this is a change from previous versions of SoundKeys.

To move this Widget, hold down the Control key (on Windows) or the Command key (on Mac OS X), click, and drag.

This Widget extracts the image (if there is one) from a VCard (.vcf) file. 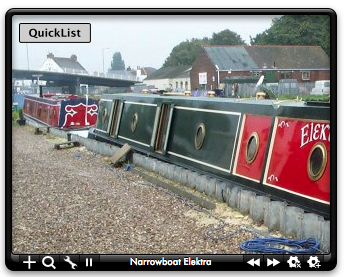 This Widget allows its user to keep tabs on any image URL put into it. It's ideal for looking at images updated dynamically, such as webcams or traffic cameras. You can check out the Eiffel Tower or Times Square up to the minute if you want!

Custom URLs are stored for later use and the Widget can spawn copies of itself with a single click, for added spying fun.